- In Primeval Days, the buttock was the primary sexual attraction, not the breast (It all goes back to the caveman!).

- In Ancient Greece, Spartan women performed bottom kicking. They would kick their booty to make it bigger and firmer.

- In the late 16th Century and early 17th Century, artist Peter Paul Rubens was best known for portraying full-bodied women with large derrières. In fact, today the term “rubenesqueis” defined in the dictionary to mean a “voluptuous woman.”

- In the 19th Century, the bustle was another style trend worn to enhance the appearance of the buttocks. The bustles were adorned with large bows and ribbons while the rest of the dress was figure-hugging tight, with waistlines being pulled in with whale bone corsets.

- 1950's: The ample backside was seen as a bonus body part on movie stars like Marilyn Monroe and Jane Russell.

- Mid 1970's: The invention of the thong bikini. It grew into wide acceptance in the 1990's (and subsequently the pop sensation Sisqo's song, “Thong Song”). This was the next step in the public blessing of the backside.

- 1997: Alexander McQueen introduced the low-cut jeans which ushered in the era of derrière décolletage and the ensuing onslaught of visible thong undergarments, fanny facials, the Brazilian Butt Lift workout and lower back tattoos.

- The lyrics in popular songs emphasize a sexy behind: “Bootylicious,” “Junk in the Trunk,” “Baby Got Back,” “Donk,” “Fat Bottom Girl.”

The influence of bootylicious celebrities including reality TV stars, pop singers and Red Carpet divas have fueled the booty craze. Suddenly big was good and fashion was accommodating.

- No longer do you just want a skinny butt, now you also need one that is “high, round, shapely and firm,” according to Elle Magazine. It has to have enough curve to round out those low-rise jeans.

- “Good Morning America”  reported that butt implants, designed to give a boost to an otherwise average rear end, are on the rise at $10,000 a pop, and the “end"' effects are reported to be very painful. How America's "Ideal" Butt Has Changed Over The Last Century 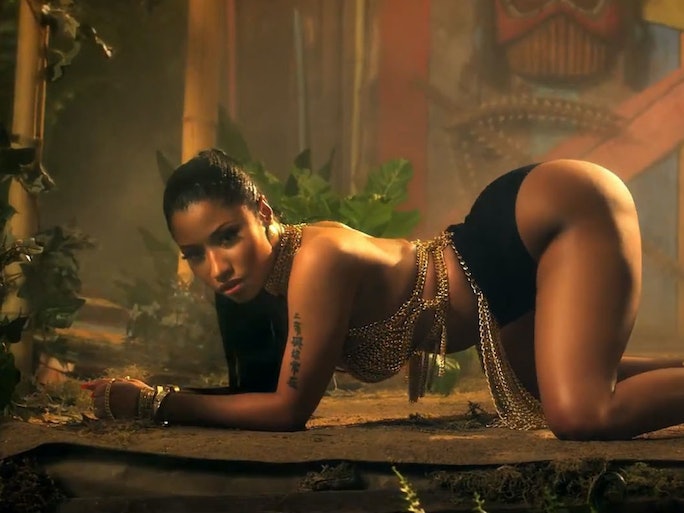